Can Wildlife Be Solved?

For your delectation and amusement here’s a riff I did in response to an item in USA Today last week:

“Civilian flights based in the USA reported 14,661

collisions with wildlife in 2018…. That’s more

than 40 a day, tying the previous year’s record.”

“Tying! I know it’s an embarrassment!”

Those were virtually the first words out of the mouth of Elmo Klein, the Interior Department’s Undersecretary for Wildlife Obliteration, when I visited him in his office last week. In fact, he almost refused to do the interview, concerned that I was going to do a hatchet job on him. When I assured him that on the contrary, I was there to publicize the problems he’s up against, to get his side of the story, his face took on a look of gratitude rarely seen in a public official.

“Okay then,” he said, “let’s talk birds. I don’t like pointing fingers, but here’s why the numbers aren’t moving. One, the airline manufacturers. Boeing and those guys, they’re so busy writing manuals they’re not even distributing, they’ve taken their eye off the ball. The planes we’ve got in the air now, they’re bigger, faster, quieter, which gives birds less time to get out of the way. Full marks for that. But it doesn’t mean the job’s done. You need to keep pushing the technology. Two, the folks in the cockpit. That’s the other piece. A lot of these planes now virtually fly themselves. But if a pilot puts the thing on cruise control so he can whatever, I hate to imagine, he’s not alert to the opportunities. Whole flocks get by. Where’s management on this? These birds aren’t going to eliminate themselves.”

But of course the feathered population is just one sliver of Klein’s immense portfolio, the size of which weighs heavily upon him.  As he knows too well, it’s one thing to announce a zero-tolerance policy vis a vis wildlife and another to achieve it. Much of the problem, Klein told me, is lack of resources.

“Which surprises me frankly, given the rhetoric out there, the promises made. I realize we’re not the only scorched-earth program competing for funds. Still, you’d think ours would be higher on the list. For example, I’ve got people in twelve states shooting fish in barrels. Everyone assumes that’s easy. Well, the fish don’t get there by themselves. It requires money and personnel, and we need more of both.” He sighed. “Everywhere I turn it’s a struggle. Zoos. They’re hard to burn down. You can’t just ask any arsonist. Sure, a child can torch a monkey house, but the flames don’t spread, you know? All the wide-open spaces. It’s a job for specialists. You need weapons-grade accelerants and guys who know how to use them. Everything’s expensive.”

“Where do you think the money should come from?”

“We’re taxpayer-funded. Where else would we get it? As far as I’m concerned, that last tax cut for the rich was a big mistake. I mean, I don’t want to get myself fired, but I’m fighting for my department. We’ve pretty much sucked the poor dry on this, the middle class. And then some tycoon comes up to me and says ‘Hey, how come I’m still seeing this antelope?’ Well, look in the mirror, pal.”

“What should your budget be then? Perfect world.”

“I’m not a numbers guy. All I know is the pressure’s ridiculous. People go out, see a chipmunk, the phones light up. And I get vilified. Meanwhile the EPA gets all the love. Toxic this, cancer that. Like what they do is hard.”

“You don’t know how much money you need?”

“All I can say is every bit helps. I saw the other day, some X number of millions going to funding for the arts. A pittance, they say. Do you know what I could do with that money? I’d have a team in the field tomorrow taking out the last of the red wolves. There are still more of those left than people realize.”

“What other challenges are you facing?”

“Bounce-backs drive me crazy. God, buffalo. They’re like the measles. You think they’re eradicated, you turn around, boom, they’re back.”

“What kind of cooperation are you getting on the international front?’

“Spotty. Kenya’s an inspiration, but in some other areas…. Whales! How can people not see the size of that problem? It’s a whale for Christ’s sake. God bless the Japanese, but they’re like the lone flag flying. Almost every other nation looks the other way. Can’t be bothered. Leave it to the next guy. With that kind of mentality….”

“Well, here at home anyway, what about getting the public involved?”

“I understand there are still some holdouts, people hiding species on private land.”

“What are you saying? Send in volunteers?”

“I can see the argument, but…. I mean sure, this country’s got armed maniacs coming out of its ears. They’d do a spectacular job. But would they stop there? That’s the problem. Besides…. What’s that cartoon, I forget what it’s called, the one where the big foot comes down on Bambi? That’s the central function of government right there, to crush. The top regimes like to do it themselves.”

“Actually though — cute story — I got a call the other day. Older gentleman. Lovely guy. He’s trying to do his bit. ‘Mr. Klein,’ he says, ‘I get up every morning, go out back and see what I can shoot for you, but I always miss. It’s discouraging.’ Isn’t that sweet? I sent him a pin.” Klein pulled a box toward him and poured some of its contents onto his desk: lapel pins of everything from hares to herons with red diagonal lines through them.

“How’s the morale in your department?”

“Up and down. Depends on the day. But I’m always right there encouraging my troops. Reminding them of the victories in sight. Condors, we’re close.”

“You’ve been close for a while.”

He gave me such a look of pained reproach I apologized at once.

“Birds are the worst,” he said. “You don’t understand. There are millions of them, and they’re shifty. But I’ll tell you one thing. If I do nothing else in this life, I’m going to clear out the parks. Yellowstone, Glacier National Park — that’s still there, isn’t it? — places like that. They’re sanctuaries. They’re supposed to be. But are they really? Let’s just say there’s peace, and there’s peace with twittering, which as far as I’m concerned is no peace at all.”

As I stood to leave, Klein expressed warm thanks for my visit and offered me a button. “How about a nice polar bear?”

I told him that unfortunately I couldn’t wear it. “A reporter becoming part of the story he’s covering, it crosses a line.”

“Really?” he said. “That’s fascinating. Journalism, ethics. I never put the two together.” 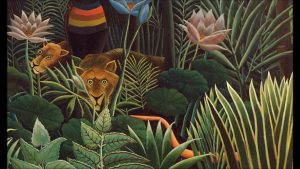