My tenure as a staff writer at GQ back in the ’90s took a fatal hit when I was assigned to do a short piece about John Lobb, the storied British shoemaking firm. Reeling from boredom at the prose I was producing, I switched to verse. This was published to much grumbling from the editor-in-chief. It was one of our last conversations.

Oh for a muse

Of leather, of shoes

To sing of a farm boy who rose —

Of John Lobb, a Victorian craftsman we glory in

Still, as the following shows…

He was just out of school

When a fall from a mule

A blow this severe

But the boy was determined to cobble.

He set out for London

A lad with a limp and a quest.

His gall and derided

His dreams of becoming the best.

So when newspapers told

Of a rush for gold

In the land of the kangaroo,

And hordes left for Australia

He found thieves, he found cholera.

Gold? Not a dollar

As prospector Lobb was a flop

But near Sydney he saw

So he opened a bootmaker’s shop.

Those boots! What a hit!

They were sturdy, they fit.

He made them in rapid succession

With a hollow heel

Where a man could conceal

His booty (if that’s the expression).

And we see him now

Standing proud at the prow

As homeward at last he sails

With a sizable stash

Of nuggets and cash

And dress boots for the Prince of Wales.

With this royal warrant

He soon had a torrent

Of London’s elite to accouter.

For a century plus

They’ve been coming and thus

Have made Lobb’s the world’s most renowned booter.

So come in to be shod:

You’ll be met by a squad

Of the best in affaires des pieds.

Of each foot. (Do yours differ? They may.)

Then one expert picks leather,

One sews it together,

Yet another examines the whole….

At last comes the day

When you wear them away

And take that inaugural stroll.

What a feeling of pep,

What a spring in your step —

These shoes practically teach you to dance.

And now down the street

Comes a drumming of feet

In rhythmic retreat and advance.

To their brotherhood large but classy:

Many other great men in their time.

And lovers and fighters

All famous — but none of them rhyme.

While those craftsmen continue to cobble.

The erosion of taste —

If one firm can combat all that, Lobb’ll. 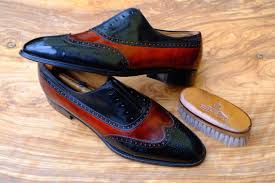