CHARLATAN
America’s Most Dangerous Huckster, the Man Who Pursued Him, and the Age of Flimflam
By Pope Brock 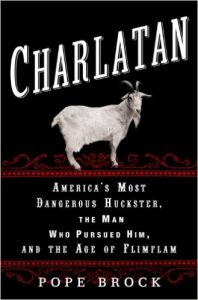 The life and times of Dr. John Romulus Brinkley, who ruled a branch of American medicine in the 1920s and 30s. Although he offered a range of bogus services, his signature cure was inserting goat testicles into the scrota of impotent men. He made millions of dollars before authorities shut him down, whereupon he jumped across the Rio Grande into Mexico, built the world’s most powerful radio station, and kept right on going. His brilliant innovations changed the course of American advertising and popular culture.

“Hugely amusing [but also] dark and cautionary, a reminder of the high price of gullibility and ignorance.” Jonathan Yardley, Washington Post Book World

“An extraordinary saga of the most dangerous quack of all time…entrancing.” – USA Today

“You will devour Charlatan….” — Chicago Tribune

“Written with glee, in a style that is pure gusto, a bubbling fountain of metaphor and arresting image…Fishbein’s campaign against Brinkley makes up one strand of this extraordinary tale and provides a bravura courtroom finale.”– Boston Globe

Fleecing the Sheep, Who Keep Coming Back for More

In 1917 the charlatan John R. Brinkley experienced what was truly a seminal moment. This so-called doctor, whose diploma had come from a medical school that was “vague, obliging and long defunct” and whose expertise was dubious at best (“if the white coat reassured people, the healing had begun”), was consulting with a 46-year-old Kansas farmer named Bill Stittsworth. “I’m all in,” Stittsworth said. “No pep. I’m a flat tire.”

Then both farmer and doctor gazed out the office window. They spied livestock. And they experienced a shared brainstorm. Supposedly at his patient’s urging, Brinkley agreed to try to restore the man’s virility via an unorthodox transplant operation. The farmer wound up with two extra testicles courtesy of one luckless goat.

For Dr. Brinkley, whose story is told with uproarious brio in Pope Brock’s heavenly “Charlatan,” this 1917 epiphany was the beginning of a mercenary miracle. “Dimly he had begun to realize that he was gifted beyond the run of doctors,” Brinkley’s adoring authorized biography would one day explain. That book would also credit Brinkley with “this lovable characteristic of genius, that money is not an aim, or an end in itself, but a means of enlarging the central idea of his life-work.”

Selflessly or otherwise, Brinkley parlayed his goat-gland breakthrough into a unique place in American history. He was much more than just a mere medical quack. In a book so lively that its wild stories are virtually wall-to-wall, Mr. Brock describes early-20th-century America’s endlessly credulous populace, with “the average citizen as guileless as the wide-mouthed shad.” Brinkley and his virility scheme tapped into the nation’s penchant for mumbo-jumbo and hence into opportunities for salesmanship that had been previously unknown.

Right from the first, Brinkley demonstrated a flair for showmanship. As a general practitioner in Arkansas, he was known for drumming up business by “renting a horse now and then at the livery stable and galloping out of town as if on an urgent call.” Later he would turn these talents toward politics and nearly get himself elected governor of Kansas in 1930. That he announced his candidacy three days after being stripped of his medical license gives at least a preliminary idea that when it came to manly assertiveness, Brinkley was in no need of his own medical services.

Among the amazing tangents that keep “Charlatan” bustling is Brinkley’s role in the creation of country radio. His desire to broadcast medical advice led him to think up other programming that might kill time for the million-watt Mexican radio station from which he broadcast, unregulated, to American listeners. This book’s six-degrees-of-separation gamesmanship is so intense that the radio station’s tentacles from the 1930s lead to a ’70s ZZ Top song with a nod to “Dr. B.”

Presentation is everything in telling this elaborate, many-faceted story. And Mr. Brock’s has three outstanding virtues. First of all, he has a terrific ear for singling out quotations. (One newspaper headline cited here: “Dr. J. R. Brinkley Swamped With Letters From Women Craving Halo of Motherhood.” One testimonial from Mrs. Brinkley about how long her husband’s treatment would be effective: “Till Gabriel blows his trumpet on Judgment Day, and then they’ll have to knock you on the head with a mallet.”)

Second, he is selective. This fast-moving, light-stepping book takes care not to throw in extraneous detail. Third, his own voice is wry enough to compete with the actual Brinkley material, which is saying a great deal. “Did he believe in it?” Mr. Brock at one point asks about the efficacy of Brinkley’s surgery. “The answer lies perhaps in small things, like his way of calling his patients ‘old fools’ when he was drunk.”

“Charlatan” also has the good fortune to revolve around high drama. There was an Ahab to Brinkley’s Moby Dick: the quack-buster Morris Fishbein, who pursued Brinkley for two and a half decades and made himself “the face, the popularizer, the lord high priest of the AMA.” Once Fishbein took up this mission, “quack busting would no longer be an insular struggle among physicians but a blood sport the whole family would enjoy.”

The Fishbein-Brinkley duel makes for such a good story that one of its high points is a moment of anticlimax. Picture this, as it is buoyantly evoked by Mr. Brock: both men with their families unwittingly aboard the Normandie for an Atlantic crossing, and Fishbein’s teenage daughter involved in a shipboard romance with the tutor of Brinkley’s young son. Eventually there came a moment of truth in which Brinkley found Fishbein in a deck chair and the two rivals were only feet apart. Nothing happened between them — then.

But Brinkley’s anti-Semitism led him to claim later on that Fishbein had been afraid of him. And in that claim, as well as in a high casualty rate among his patients, lay the seed of Brinkley’s ultimate downfall. (Hubris led him to bring a libel suit against Fishbein’s muckraking journalism — and to reveal himself as a charlatan in courtroom testimony.)

“Charlatan” has a glittering cast of secondary characters (Freud and Yeats count among history’s many A-list virility-treatment seekers.) And its settings range from the Atlanta where “Gone With the Wind” had its premiere (with Brinkley as a celebrity guest) to the home base of the outlaw radio station. (“Overnight the Mexican border was crawling with turbaned individuals once suckled by shamans or teleported from Dimension 9.”)

Props range from chimpanzees to an airplane of Charles Lindbergh, borrowed by Brinkley as he rebuilt the model for American political campaigning. And the topicality of this material is deathless. Mr. Brock never lets his readers forget that the follies on display in “Charlatan” are alive and well today. 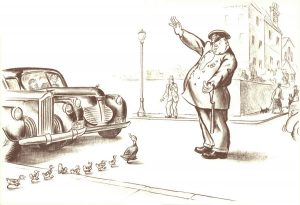