A few hours later, as Victorian novel freaks know, Charles Dickens stroked out at age 58. He left The Mystery of Edwin Drood unfinished and no outline to indicate where the story was going. Edwin (the character) has disappeared, that’s all we know, and like Dickens he’s been gone ever since. 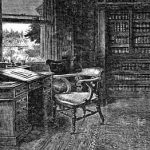 Artist Robert William Buss took one look and also saw an opportunity. The print inspired him to create the grand-scale painting above….

…The dozing author visited by a host of his characters.