Nina Simone and the Inexplicable Grammy

On last night’s show I played the title cut from Nina Simone’s debut album, Little Girl Blue (1958). It’s a Rodgers and Hart song introduced in the 1935 Broadway show Jumbo in which, at the conclusion of each performance, Jimmy Durante lay on the stage and an elephant put its foot on his head. Shorn of Jumbo, the song has had a long, long life as a favorite of jazz greats, but Simone’s version is especially striking because it’s done as a quodlibet. This — as I learned two days ago — is an interweaving of melodies from different songs to create a new whole (a sophisticated mash-up, in other words). In her case, she combines Rodgers’ melody with that of the Christmas carol Good King Wenceslas. It is a thing of strange and surpassing beauty: 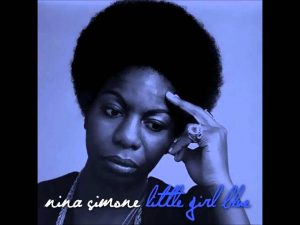 I realized then that I had another quodlibet in my stock of tunes which I’ve played from time to time, far different from Simone’s. It is in fact the cheesiest quodlibet ever conceived — by Bing Crosby’s musical director, Alan Copeland — and a Grammy winner in the category of Best Contemporary Performance by a Chorus in 1969:
Here it is
You have to think the judges heard it once and then couldn’t get it out of their heads. Or maybe that’s just me.
Leave a comment