Late in her life I saw Peggy Lee perform at a club in New York. She was chair-bound, but surrounded by 5 of the finest in jazz (drummer Grady Tate I remember was one), she radiated like the queen of the night on her throne. Somewhere during the set, for what must have been for her the crushingly umpteenth time, she sang “Why Don’t You Do Right,” the song that put her on the map in 1942 and which, next to “Fever,” became her signature song (if you can have two). She put it over like a pro, and I was glad I was there to hear it. I’ve always loved WDYDR, which is bluesy for real as opposed to “Fever,” a Little Willie John cover, with the hipster finger snaps.

Anyway, I didn’t know at the time just how knocked-out loaded WDYDR really is. Turns out it started life as a different song altogether, “Weed Smoker’s Dream,” recorded by the Harlem Hamfats in 1936. Even the drums are stoned:

The Hamfats themselves had an interesting origin: they weren’t naturally occurring but deliberately assembled by a producer with a commercial eye, like Peter, Paul & Mary or the Monkees. They weren’t even from Harlem. Once they got together though they made some very real recordings as songs like “Root, Hog or Die,” and “Let’s Get Drunk and Truck” attest. “Weed Smoker’s Dream,” written by their guitarist, Kansas Joe McCoy, was another hit for them, conveying the sound advice that it’s hard to do well selling grass when you’re high on the stuff yourself. Unlike the Hamfats’ other material though this number broke out of its woozy netherworld because the tune was so damn good. In its original form (music and lyrics) the song appeared as soundtrack to an extremely far-out 1930s cartoon, a portion of which you can find here: 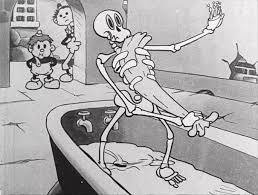 Then, retrofitted with new lyrics by McCoy himself, it floated into the white world via Peggy Lee. See and hear:

Maybe it’s her delivery, but I wouldn’t call that sanitized.

Who Put the Benzedrine….?

But that’s another story.